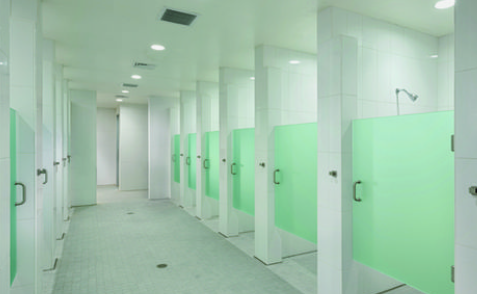 American bathroom stalls are constructed as big rooms without interior walls. However, during the last stage of conduction, stall walls are installed. The stall walls are often produced by mass-production, which saves production costs and makes installation easy.

The surprising thing you’ll notice is the 1/2” gaps left during the modular construction. So why do they leave gaps?

1. To Alert Passers-by in Case of Emergency

Typically, when people feel unwell, they tend to gather in the bathroom. Someone would get unconscious while sitting on the toilet bowl and remain undiscovered for hours. Thus, the presence of 1/2-inch gaps in American bathrooms acts as the savior.

In case of such emergencies, any passers-by would easily notice, and the needy at hand would get rescued more efficiently without the need of breaking the door if it’s locked.

2. Easy To Install and Cost-Efficient

Installers of bathroom stalls are able to install simple stall partitions that fit into any room, no matter what the floor covering is or how tall, and wide the bathroom is.

Floor-to-ceiling restroom stalls would need custom cutting; they would also need to be installed to the full height of the restroom. It would cost twice or even triple the amount of money as a stall with gaps in the bottom. It is often more prudent to invest in shorter, more flexible stalls.

3. To Discourage Unwanted Behaviors in Bathrooms

If someone feels less enclosed or protected from getting seen by others, they are less likely to be involved in criminal activity. Incompletely enclosed bathroom stalls may cause people to feel isolated, which may lead them to engage in illegal activities (as in the case of drug use).

People are less likely to do what is wrong when the toilet seats are open to the public because the people who use them are reminded that a public bathroom is a public place.

It would be nice to have a door that can reach all the way to the floor, but that would be the main reason a restroom is filthy. Because of the wide stall gaps, sanitation workers can quickly clean the floors by sliding their mops right under the stall doors and all around the stalls.

Dirt won’t accumulate on the corner of a wall, and it can get cleaned efficiently and quickly. The significant gaps between the stall doors and walls allow easier cleaning. If the gaps between the walls and bathroom doors were wider, janitors would have to bend over to clean the areas. This would have made their job more difficult. It would also make the whole process of cleaning the facility much longer.

5. Avoid You from Getting Trapped Inside the Bathroom

When someone is trapped inside a bathroom stall, it is common for a door or a lock to jam. But this would never happen with bathroom stalls that have gaps. You can easily escape from any stall by crawling across the stall doorway and between the floor and the wall.

6. To Allow Easy Sharing of Tissue Paper When Necessary

Sometimes, it will be too late for one to discover that tissue paper in the bathroom is lacking, and you will require a helper (or sometimes a stranger) to assist you out of this unfortunate situation. If you have a stall too high to pass a roll of tissue paper, you will have to open the bathroom stall door.

Thankfully, a bathroom stall with a small gap between the walls of the stall will help you to avoid this by allowing you to easily pass the tissue paper via the gap.

7. To Easily Tell You That the Bathroom Is Vacant

If someone uses a bathroom stall to relax after having a meal or doing some other small business, it is likely that someone outside the bathroom is waiting to have their turn at the bathroom. Users will stay a lot longer to go to the bathroom.

Those who rush to use the bathroom more often tend to do their business much faster, meaning fewer people will wait in line to use their facilities. Public toilets also offer a clean and private facility for persons with profound disabilities.

Last but not least, it is a profoundly embarrassing experience to be the person who is the next to walk into a fully-enclosed restroom stall after another user has just completed their business.

Walking in a bathroom stall with gaps below the floor is better as it lets air circulate freely. It would undoubtedly stink, but free air circulation makes it much better.

Why are American and Australian toilets different?

When water is poured from an Australian toilet, it swirls in a direction that is opposite to that of water flowing down an American toilet. Some people have asked us about the direction in which water swirls, which is the most common difference between Australian and  American toilets.

In which country is tissue paper not necessary?

Spain, Venezuela, Argentina, Japan, Italy, Portugal, and France. People from all these countries (mainly from Europe) often have a bidet rather than toilet paper in their restrooms.

What is the difference between American and  English toilets?

English toilets feature a double-flushing system. It gives you the option of choosing between a heavy or light flush. Many American bathrooms, however, feature a single handle that allows you to flush both liquid and solid waste the same way.

If you aren’t convinced that gaps in bathroom stalls are a winning design, remember that enclosed bathroom stalls allow little air aeration. What you don’t need or want in a municipal restroom is the smell of getting trapped inside the stall. Also, the gaps keep users moving faster, and no time gets wasted in the bathroom. Not to mention, who doesn’t want to be rescued from behind the bathroom stalls in case of an emergency?