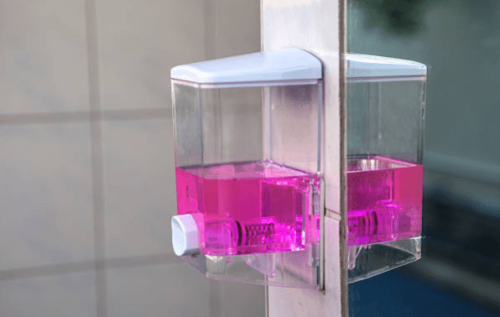 You’ve probably seen that pink soap in public bathrooms, but what is it really made of? It’s in nearly all public bathroom – office buildings, fast-food restaurants, shopping malls, airports, medical buildings, and schools. The soap is often fluorescent and oozy and has that distinctly sickly sweet, fake floral scent.

Have you ever wondered what’s in the pink soap? Why does it seem different from other regular soaps, or what effect does it have on your skin microbe? Since hand washing with soap acts as a first line of defense from contracting many diseases, we tried to find out what’s all about the pink soap in public bathrooms. Read on!

What Is in The Pink Soap in Public Bathrooms?

In our adventure, we tried to look into the ingredients found in all the pink, blue, purple, orange, red, and green or clear soaps available in the public restrooms. We also checked out a few companies on the internet and found one that had the ingredients listed. One of the companies was the lead distributor in the US and Canada.

We received a link to a safety data sheet for one of their products, but it only lists the ingredients labeled ‘chemicals’ and requires safety data. What is not listed are coloring agents, fragrances, and emulsifiers. We sent a message to the company, and thanks to them, they responded quickly to our request for a complete list of ingredients. We had to wait until someone returned from a holiday, but below is our finding.

Ingredients Found in The Pink Soap In Public Bathrooms

We came across another lamentable study about bacteria contamination after using contaminated soap dispensers in public bathrooms. Believe us; the study can make you stay up all night.

Bulk-soap dispensers can easily become contaminated by other bacteria, and in the study, it was demonstrated that about one in four soap dispensers in public bathrooms are contaminated. This study was designed to evaluate bacterial hand contamination and to determine the spread of bacteria by testing soap in a controlled laboratory setting. One in four is just astonishing! They found that contaminated soap dispensers raise the risk of opportunistic pathogens entering public places.

We aren’t discouraging you from washing your hands after using public bathrooms. Hand washing is critical for your health and the health of others. But not all people are equally meticulous when it comes to washing their hands.

Do Not Forget the Poop Air Blown by Bathroom Hand Dryers

Most of us frequently walk out of public bathrooms with our hands wet and sprinkling water all over the place. It seems that the hot air that comes out of the dryers in the bathroom is uncomfortable for many people. This study confirms what we think: Our instincts are correct. These hand dryers blow germs and spores into the bathroom.

The Triclosan Ban in The Pink Soap in Public Bathrooms Recipe

We were happy to discover that pink Soap In Public Bathrooms does not have triclosan. In the late 19th century, manufacturers began to include triclosan into their soap production recipes. However, the producers thought this antibacterial and antimicrobial ingredient was superior to normal soap. By the early 21st century, 75% of citizens in the US were already exposed to triclosan. Furthermore, 75% of the citizens in the US excreted triclosan in their pee. However, Canadian research shows that women are prone to exposure compared to males.

Scientific research has proven that triclosan exposure may have health impacts on humans, the environment, and animals. Furthermore, research has discovered that it is ineffective compared to normal soap in preventing infections or contaminating bacteria on your hands.

Here are other effects of triclosan:

In 2016, the FDA banned triclosan in the US from being included in soap manufacturing for safety reasons. The ban was also implemented in the EU in 2017. However, in Canada, triclosan has still been used but in restricted amounts. Some companies have eliminated triclosan from their recipe for soap production due to their consumer reviews.

However, the ban is not applicable to hand wipes, hand sanitizers, and healthcare settings. In addition, products like sneakers, garbage bags, yoga mats, cosmetics, refrigerator filters, and toothpaste still include triclosan in their manufacturing recipes.

Are Your Hands Too Clean? Nourishing Your Skin’s Microbiome

Let us agree once again, hand-washing is essential! This practice assists in fighting the spread of harmful diseases. So, it’s wise to wash your hands regularly.

You have probably heard that living without antibacterial soaps in your house is impossible and that our subordination of all of these products disrupts our health. The reason is that it prevents exposure to microbes that help to develop our immune systems, especially when we are very young. This is referred to as the ‘hygiene hypothesis.

Researchers have now claimed that the hygiene hypothesis is a myth and that the main cause of increasing rates of allergies and autoimmune diseases isn’t about hygiene but yet our lack of subjection to good microbes. They say our microbiome is the key to health. Our skin has a complex microbiome with hundreds of different kinds of bacteria. When we are born, this bacteria is evenly distributed throughout our skin. Still, when we are three months old, different communities of bacteria start to colonize different parts of our bodies.

Changes in our skin microbiome can cause immune system inflammation, infect people with diseases like psoriasis, and cause painful conditions like acne. The gut microbiome remains in the dark, but more research is emerging. Antibacterial products can interfere with our skin microbiome. A research study was carried out in a rural village in Madagascar to compare people who used antibacterial soap with people who didn’t. After a week, the antibacterial soap group showed that their skin flora increased by more bacteria than those in the control group.

Despite all the people who stopped using the pink soap, there was a noticeable lack of diversity in this group. Researchers concluded that antibacterial soaps could have a staying effect on microbes and cause rapid changes in bacterial skin communities, potentially damaging effects on the skin.

What are other soap brands recommended?

There is a variety of brands of soap that are recommended for public bathrooms. These include:

What is the smell of the pink soap in the bathroom?

The pink soap in the bathroom generally has a fruity floral smell.

What are some of the ingredients that we can use to color soap?

You may use oxides, micas, and liquid dyes, but you can also use soap colorants that are more readily available. Even though natural colorants are not as bright as artificial colors, they are just as lovely in their soft tones.

It may be difficult to decide between liquid soap and bar soap when you realize how many chemicals are in the pink soap in public bathrooms. However, when we talk of washing your hands after going to a public bathroom where pathogens are present, it’s wise to use liquid soap. Luckily, we’ve left you several options to buy. So, feel free to get one and thank us later.