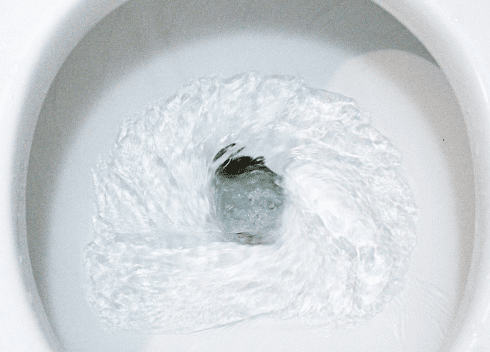 There are a few common reasons why toilet water in your toilet rises too high when flushed, and thankfully, they are often relatively easy to fix. For you to comprehend and know how to fix it well, scroll down to the end of this article and thank us later.

4 Possible Reasons Why Toilet Water Rises Too High When Flushed

Here are the most likely causes for your toilet water to rise after you flush it: Let’s get to it:

Another potential reason may be that your vent pipe is blocked in your plumbing system. If you have water pipes in your home, you need air to permit water to flow. If you are holding a drinking straw tightly and filling it with water, getting the water out of the pipe will be complicated unless you remove your finger from the end.

The pipes that connect your toilet to the rest of the system are basically the same: if there is no air in the system, the water trapped in the pipes will stay in place. If you have blocked air vents in your plumbing system, it might be because one of the vents has become clogged.

If the air vent in your house becomes blocked, the water in your pipes will not flow properly, which could cause toilet clogs or even water to back up through your pipes. If a problem like this occurs, it will affect the plumbing system in general; however, if you notice that only one toilet is having problems, this is not likely to be the source of your toilet. If you think the whole plumbing system is blocked, one of your air vents is very likely to be clogged.

2. Your Toilet Is Clogged

When you flush your toilet, the water will rise a lot too high, possibly because a blockage in one of the pipes allows the water to flow down the toilet. Sometimes, toilets can handle regular toilet paper flushed down them, but if you put things into the toilet bowl that aren’t designed to get flushed down the drain – they will become clogged. Once a clog gets formed, even standard toilet paper can become entangled, which can cause more damage to the pipes.

3. Is There a Problem with Your Cistern Components?

Sometimes you might find sites saying that if your toilet rises too high in your bowl, it might be due to an issue with your toilet tank.

You may think it’s because of a faulty toilet seal, a faulty toilet flapper, or a faulty flapper chain. It is possible that some of the components in your toilet may become defective or even fail, but there is absolutely no way that they could cause your water to rise very high.

Some websites claim that faulty toilet flappers or toilet seals might cause toilet water to rise too high when flushed. Also, they might argue that these defective tank components can cause persistent water flow into your bowl, causing the water to rise too high. However, a toilet typically has an S-trap designed to keep the water level in your bowl at a constant level, so if you pour water into your toilet too much, the water will disappear down the drain.

This implies that when your toilet cistern starts to act improperly, it can cause water to quickly become too high.

Water rising too high from your toilet bowl is caused by something happening “below” the toilet, not “above” it.

If there is a problem in your cistern and there is not enough water going to the bowl to allow a proper flush, or if your toilet is running slow, it could cause the blockage to occur in the first place.

It is vital to make sure that when you clear the toilet and remove the blockage, the water tank is also functioning correctly – and adjust the level of water in the tank if you have to – or else you will risk another blockage happening later.

Toilet Water Rises Too High When Flushed, How to fix it.

So now that we know what causes toilet water to overflow, we can start looking at the several ways you can prevent that from happening.

First thing first, you’ll need to seek the help of a toilet plunger.

If the toilet is not draining normally, something is blocking a waste pipe, so it is best if you get a plunger as soon as possible and try to push it down and up.

Toilet plungers create pressure in your toilet bowl that forces water down the drainpipe and sucks it up to the top. The idea is that as your water pressure increases, it will pull and push on whatever blockage you have in your toilet. That should eventually cause it to fall out of your toilet.

Take your plunger and put its suction cup end in the bowl. Use the plunger to push down on the obstruction that is blocking your toilet. Pull the plunger up and repeat this process several times, trying to exert as much force as possible.

After a few attempts, you’ll find it easier to push down the toilet bowl and pull up the waste pipe. You might even see some old toilet paper in the toilet bowl sinking into the water tank. This is good news! This is a good indicator that the plunger is working.

If you notice that a lot of toilet paper is getting sucked up in the toilet bowl, it’s best to take it out and dispose of in the bin. Otherwise, it may cause more problems.

After a few attempts- and you discover that you have removed the blockages-take out your plunger from the toilet bowl.

Pro Tip: Plungers are handy tools, and every household should have one. It is relatively cheap to buy a good plunger from a hardware store – since you will probably use it more often than you think.

Option 2 – Use Your Hands

One possibility is that the clog is near the toilet bowl; if that’s the case, you can easily remove it by just pulling it out with your hands.

Start by removing all the water in the toilet bowl; achieve this by scooping the water out of your bowl with an old coffee cup and wiping the remnants using an old towel.

You should probably be wearing a pair of very thick gloves as you do this. Put your hand in the bowl and gently push any debris far down as you can. But if you feel the debris, start pulling it out yourself.

After getting everything you need from the toilet bowl, give your toilet a good flush and confirm whether the issue is solved.

Pro Tip: Be careful if you do that because you don’t know who is stuck in the trap. Nobody in your home is flushing sharp things down the bowl, but since you don’t know what’s in the toilet, it is prudent to be cautious. So watch out!

If you can’t force the blockage out with a plunger or remove it with your hands, you’ll need to use a snake to fix it.

Plumber’s snakes are powerful tools that allow you to get into the drain to unclog blockages. They can be purchased at any local hardware store near you or online. Plumber snakes are long, flexible metal rods with two hooks on the end that allow them to grip something firmly to unblock the pipe.

If you want to use a snake to clear a blockage in your toilet, you’ll have to feed the toilet snake into the drain and let it go until it reaches the clog. Some pipes may bend, but if that happens, you’ll keep turning your snake until it gets the obstruction.

Once you pull out the snake, you’ll see what it has caught up from the toilet drain. Throw away the object in a plastic bag.

Give your toilet a good flush, and then check to see if the water drains out of it correctly. If it does, the drains should flow freely again, and your problem is solved if they do.

If you have problems with your whole toilet system – or in a case where none of the tips above works out for you, it’s best to try clearing out obstructions in your air vent pipe.

If you find a problem in your vent pipe, you can try to unblock it. Use a steady ladder to climb up to the top of your house.

If your toilet vent has a grille on the top to stop any debris or leaves from falling into it, take off any leaves that have settled over the grille.

If that doesn’t work, try removing the grille and inserting a hook to pull anything that may be stuck in your vent pipe. You can use something like a long, bent wire that could potentially be used as a coat hanger.

After that, give your toilet a good flush to see if the water drains away more quickly.

Pro Tip: The last resort is to try using a snake to reach inside the toilet to try to remove obstructions.

What happens if the toilet water level is too high?

If you notice that your toilet water rises too high when flushed, you may have plumbing issues. These may include clogs in the vent, drain, or trap. Luckily, most blockages are easily removed with a plunger. But some blockages are challenging to get out of a toilet. In such cases, use a toilet snake to fix it.

If you feel that you’re stuck anywhere, we recommend you call a professional plumber to come and help you.